Hoogeveen again with a capital H2? 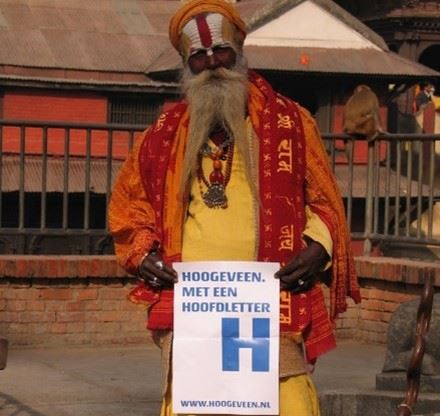 This sentence, but without the 2, has been a long-lasting city marketing campaign for Hoogeveen that started in 2009. With the campaign, Hoogeveen earned the predicate “Best inner city of the Netherlands”. But will this slogan become true again? It all started with the open innovation platform Hydrogreenn. Companies and knowledge institutions from the north are affiliated to this, all of whom believe that the hydrogen economy can replace the natural gas economy. The innovation platform was looking for a village or neighbourhood that they could adopt as a pilot, and the province of Drenthe asked the municipality of Hoogeveen if they wanted to do that. The municipality of Hoogeveen said yes. So the project started and Hydrogreenn prepared an analysis report for the development of hydrogen in the district Nijstad Oost, which will be developed, and later a part of the existing district Erflanden West. The report reflects a broad and thorough study into the alternatives for energy transition in the districts. Subsidies were granted of approximately 4 million euros from the Government in “Programma Aardgasvrije wijken” and an additional 650 thousand euros from the province Drenthe. An information happening was held in 2019 and a website for information about the project was built.

Is Hoogeveen the problem for the solution of H2?

With the presentation of the report Waterstofwijk and the granting of subsidies, the real project could start. Still a very important question is: Will the citizens of hydrogen district accept the proposed project for heating with hydrogen? In the beginning, a questionnaire concerning social acceptance was sent to the citizens of the district, but only approximately one hundred responses were received, a 10% percent response. That is considered to be too small to be representative. The municipality Hoogeveen is planning to decide later this year on development of the new district Nijstad Oost, and they need a better insight before making the decision. The question is: When is social acceptance high enough to make the decision to go ahead? The 20 students of the course Energy for Society at Hanze university as a module in the course were asked by the municipality to conduct research with the following topic.

“How can the social acceptance of hydrogen by the citizen of the hydrogen district be improved?”

The students were divided in 7 groups and these groups were asked to develop a separate research topic and to prepare a research proposal. For this purpose we had an online meeting with the client and with Hydrogreenn to get a better understanding of the pressing questions that needed to be answered. In a desk research we found a framework for social acceptance from Sovacool & Laksmi Ratan (2012). The framework consists of nine criteria divided over three dimensions: Socio-Political Acceptance, Market Acceptance and Community Acceptance. The criterion of Co-ownership belongs to the last dimension. We found this criterion interesting to research because setting up an energy cooperative is part of the project plan Waterstofwijk. Based on the nine criteria we developed the following question for the research proposal:

"How can co-ownership by the citizens of the waterstofwijk Hoogeveen influence the social acceptance within the community of Erflanden?" 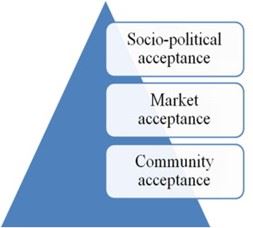 We developed an interview questionnaire based on the mentioned nine criteria. Within the scope of our research project, we interviewed four citizens of the hydrogen district, one also the chairman of the residential board and one also a counsellor. The interviews were transcribed and after that related to the nine factors of the framework.
The result based on our interviews and the main research question is:

Other results form the nine criteria are:

Recommendations for Hoogeveen with a capital H2.

Our group has provided the municipality with the following recommendations:

In our report we also gave some recommendations about the public monitor that could play a role in improving the communication between the residents and project participants. At the end of the research project all groups presented their research and the outcomes to the Municipality and the representative of Hydrogreenn. It was interesting to see that although the focus of research of the groups were different, the findings were comparable.

My role as an energy transition professional.

My group started very enthusiastic with the project. With our knowledge from the course Energy for Society we were able to prepare a good scientific basis for the research proposal and a questionnaire for the interviews. We were also able to sort all the received information to the nine criteria and with this a good structure for answering the research questions. It was a bit disappointing to discover that though the municipality and Hydrogreenn have developed a good proposal for the district and have thought they were doing the right thigs, this has not been perceived in that way by the citizens. I was also disappointed that the client’s reaction on our presentations was defensive. They were not really prepared to hear and process the critical messages in the presentations. Well that is life of an energy transition professional: To deal with these situations and bring it back to what it really is about: Socially Accepted Energy Transition.

I think that when the municipality of Hoogeveen thinks of co-creation it is within the framework of Hydrogen and that when the citizens think of co-creation it is within the framework of all possible scenarios of energy transition. A quote from Cindy van de Velde-Kremer, managing director of Vereniging Eigen Huis (VEH) in Cobouw is: “Do not speak to the citizens, but with them.” and a second quote of her: “Provide freedom of choice and market forces”. That are the criteria 4 and 8 of the earlier mentioned framework. This needs to be dealt with in the project. That is the role of an energy strategist.